The basic idea that results in the founding of a bicycle company often appears to be similar. "We want to build the best bikes!" or "We want to make the lightest wheels". That sort of thing. With Hope, one thing was clear from the start. There would be lots of CNC machining, because CNC machining is what they do best. The founders wanted to combine their hobby - cycling - with their craft, so their first product were disc brakes. For decades, Hope has supplied bicycle parts that not only convince with unbeatable function thanks to the high-precision manufacturing method, they also look extremely stylish. 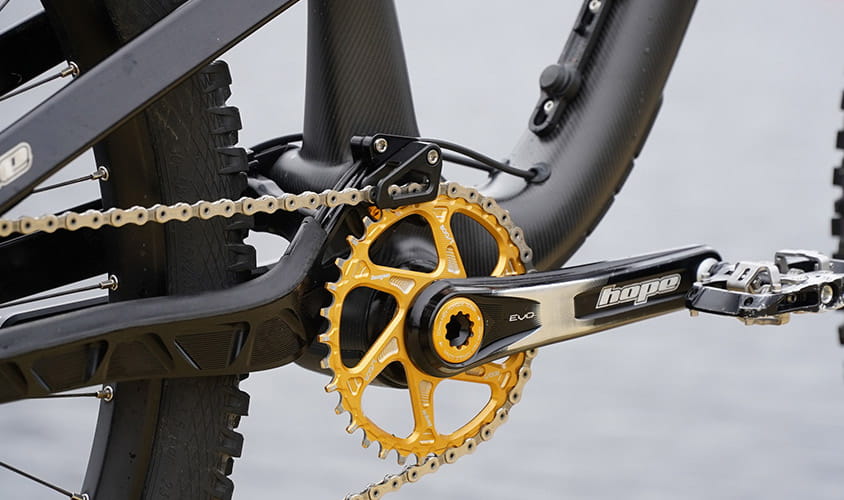 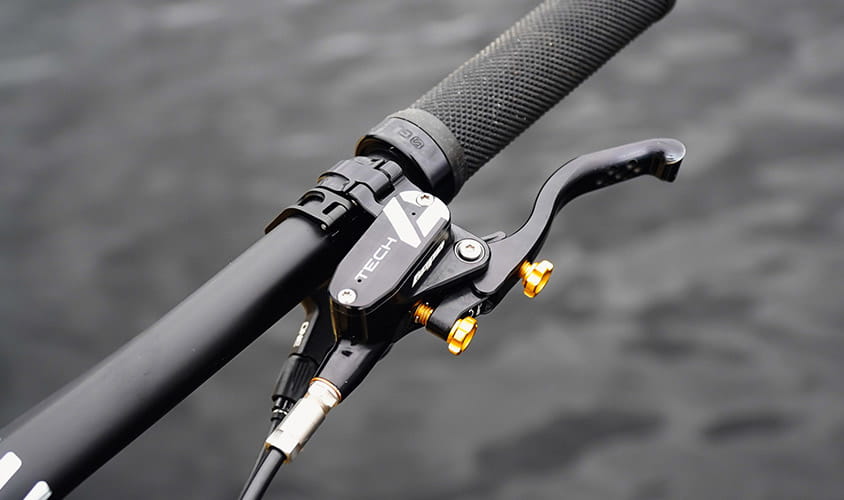 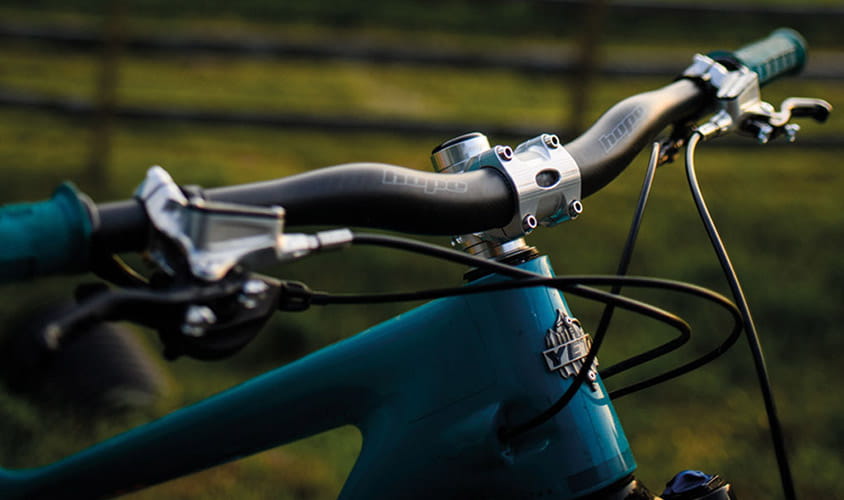 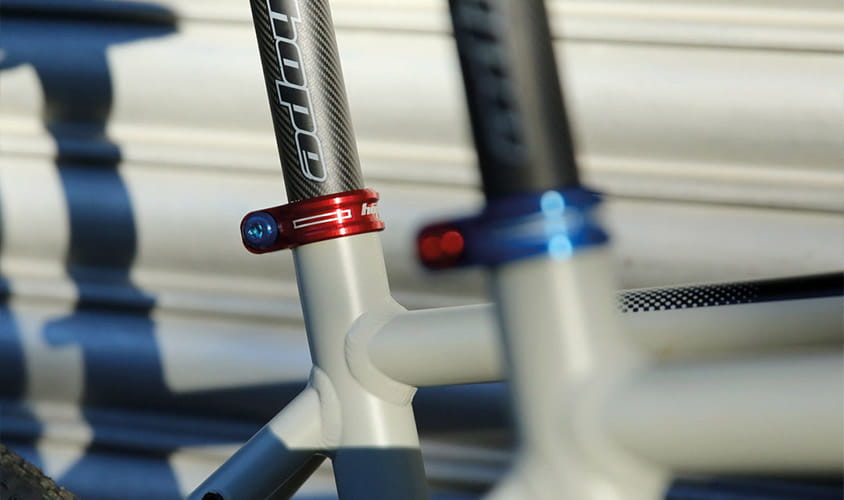 Things to know about Hope

Barnoldswick, England, isn't exactly widely known, but if you're a bike fan, you should know the place. Here, in the late 1980s, Ian Weatherill and Simon Sharp wanted to hit the brakes on their tours, but the available brakes' performance must have been far below expectations. So the two engineers and specialists in CNC-machined parts developed disc brake rotors for bicycles, initially only for their own use. The two bicycle enthusiasts quickly realized that these disc brakes would succeed on the market, so they founded Hope in 1989. The next successful product was a front wheel hub, followed by other bicycle parts.

Today Hope makes all kinds of mountain bike components. Hubs, brakes, handlebars, stems, wheels, pedals and entire crank sets are part of the product portfolio. Of course, Hope also provides the right tools for mounting new parts. Unlike other manufacturers who first have an idea and then spend years working out the optimal manufacturing method, at Hope everyone already knew how precision parts had to be manufactured so that they could withstand the enormous forces affecting MTB parts. Only CNC machined bike parts can guarantee such functionality, the durability speaks for itself, true to Hope's motto:

Let the products do the talking

With such a portfolio, they had almost everything at hand they needed to build a sensational bike, the only thing missing was the frame. Since the two company founders never really wanted to be "any old bike brand", but rather designing a bike of their own had always been their dream, they began developing their own mountain bike with great attention to detail. And here, too, the CNC milling machine got to work, even though it is not directly involved in the processing of carbon. The molds for the carbon frame, however, come of course from the precision milling machine.

Hope did not simply want to build a mountain bike, being one of the world's best manufacturers of bicycle parts, they wanted to build the mountain bike. The outcome is the HB.130. The product developers shopped only with the best of the best, the fully-suspended bike has Fox shocks, and a SRAM Eagle X01, apart from that, only Hope parts are installed. The makers describe the bike as a perfect all-rounder, test rides on the trails, climbing passages and descents of the Lake District confirm this.

Bike components made by Hope

They were Hope's first product and Hope still makes them – durable disc brakes. Hope's discs are particularly popular with enduro and downhill riders. Both, Hope T4 E4 and T4 V4, are considered a popular tuning accessory among mountain bikers. The CNC-milled brake calipers and brake levers not only work great, they are available in different colors and are therefore a real eye-catcher on any bike.

The brakes are perhaps the best-known products of the manufacturer, but the hubs, wheelsets and drivetrain components or the cockpit parts are no less recommendable. All bike parts are meticulously developed, tested and manufactured in England.

Excellent bike parts are of course not only bought by hobby bikers, especially pros are always in need of components that can stomach a lot. That's why you will find Hope's bike parts at any race. The brand collaborates with many racers and brand ambassadors. When it comes to team riders, Hope likes to employ unique characters. Fabio Wibmer, who inspires the masses with his incredible videos, is part of the team. Another rider is Nico Vink, known for his ever-growing jumps around the Fest Series. Jamie Nicholl is also a unique personality in the MTB circus. In 2013, he came out of nowhere, entered the EWS as a privateer and directly proved he could play with the big boys.

In recent years, many manufacturers who produce bicycles and bicycle parts have reviewed their production regarding sustainability and adapted if necessary. This has also happened at Hope, of course.

Production should generate as little waste as possible, so leftovers and faulty items are recycled. In addition, all production takes place on the company's own factory premises in Barnoldswick, so many unnecessary transport miles are saved.

The least pollution occurs when a product doesn't need to be manufactured in the first place, or the other way around: if a bike part lasts as long as possible, you don't need a new one. New developments are tested carefully and under the most severe conditions for this reason, only what proves to be extremely durable goes into serial production. Hope also stores many parts, even from components that are no longer manufactured, so the bike parts can be repaired again and again. But of course, it's best for nature and for your wallet if the parts don't break in the first place. The excellent quality guarantees long-lasting products, which benefits bikers and the environment.

If you want to equip your bike with the CNC-machined bike parts from Hope, you will find a wide selection in our Hope brand store. We have plenty of their stems, handlebars, pedals and wheels for you. And of course we also carry Hope's iconic disc brakes. In addition to complete disc brake systems, we also provide the matching adapters, tools and bleeding kits with brake fluid, and brake pads.