Might one single product perhaps be a somewhat small portfolio to found a new company on? It seems not, SRAMs incredible success proves otherwise. That first bike part was not even particularly spectacular if you consider the complex construction of a bicycle. Today, SRAM is one of the most famous manufacturers of bicycle components on the planet, over the years it has evolved into a real empire of bicycle parts by growing organically and by buying other companies. But it all started with a ... 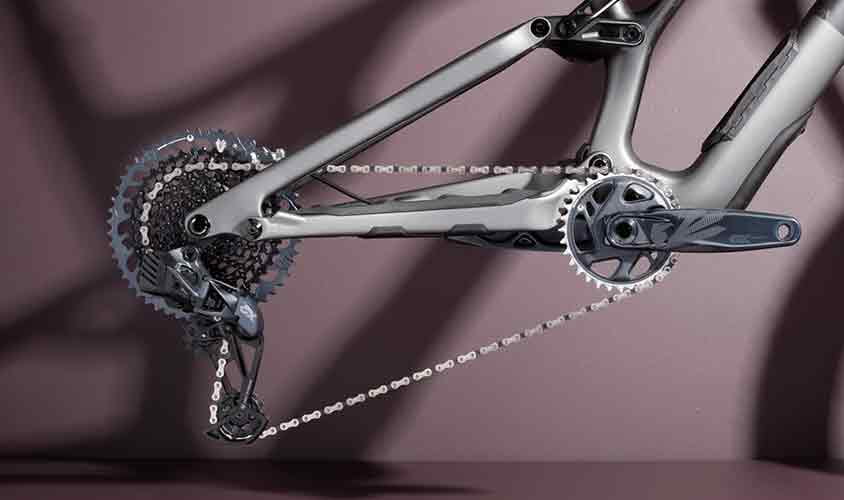 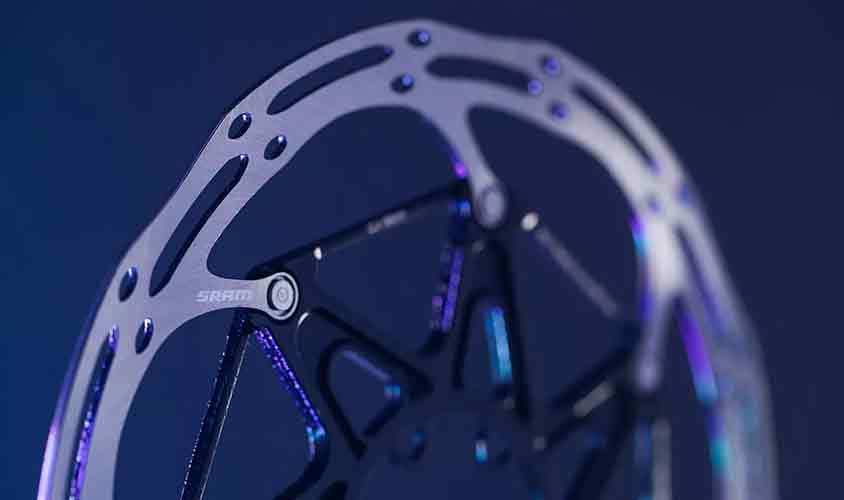 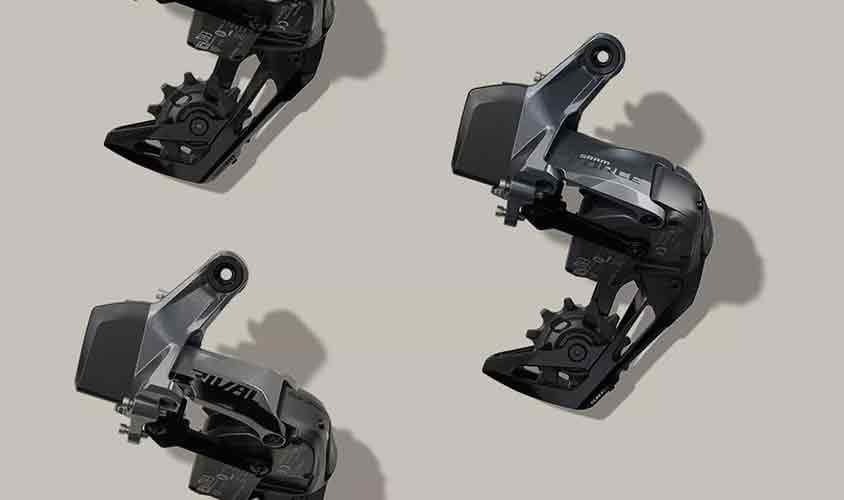 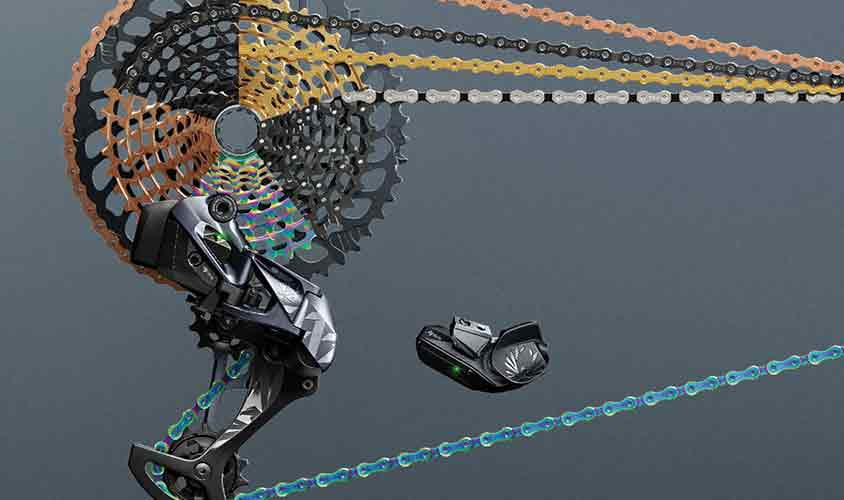 Things to know about SRAM

A small twist grip shifter was the starting signal with which the company set off in 1987 from its headquarters in Chicago on Lake Michigan. There, the first Gripshift shifters were developed and manufactured. By the way, the name SRAM is an acronym of the first names of the company’s founders, Scott Molina, Stan Ray Day and Sam Patterson. SRAMs factories are located in China, Taiwan, Portugal and the USA, among others. Schweinfurt, Germany, is home to SRAM’s thinktank and its European headquarters.

The twist grip that revolutionized the bicycle world

The Grip Shift was designed in the late 1980s for road bikes and triathlon bikes. The brains behind the development were active triathlon bikers. And they were fed up with the gearshifts that had been in use until then. But the shifters themselves were not the real problem, rather their position was anything but handy! Until the 80s, the shifters sat on the top tube of the road bike. This meant either pedaling without looking ahead or shifting by ear, neither of which were good alternatives.

Moving the shifters to the handlebars was a smart move, even though the rest of the gearshift still had to be purchased from the ruling bike part trailblazer, Simano. Turning the lever into an twist grip that could be operated intuitively and without even taking one hand off the handlebars proved to be similarly ingenious. In the 1990s, mountain bikes hit the bike world like a hurricane, of course, the twist shifter was ready to be installed on MTBs.

From the mid-1990s, SRAM expanded its product portfolio through its own new developments and other products such as ESP rear derailleurs. The range also became broader through the acquisition of other brands. Instead of developing more bike components from scratch and through all the teething troubles, SRAM prefers to buy experienced companies and their know-how.

SRAM - many bike brands under one roof

One of the best-known achievements was the acquisition of the bicycle division of the German company Fichtel & Sachs. With this addition, SRAM brought a lot of know-how and tradition made in Europe. Sachs had launched the first two-speed hub gear in Germany in 1907, it has been mounted on bicycles for over 50 years. With the takeover, SRAM had gained an European site at the company's location in Schweinfurt, the old factory became a modern development center.

At the beginning of the 2000s, the company also took over the suspension fork and shock manufacturer RockShox. With Avid, bike brakes were added to the product range in 2004. Just one year later, SRAM once again expanded its catalog with cranks, bottom brackets, handlebars, stems and pedals made by Truvativ. Next, the American wheel manufacturer Zipp was bought in 2007, and made SRAM finally draw level with Shimano and Campangnolo. Shortly before that, SRAM Force and SRAM Rival racing bike components were launched – the company’s first own road bike groupsets.

With production facilities and branches on almost every continent and the world headquarters in Chicago, SRAM is a true global player in the bicycle business.

SRAM itself is known for its high-quality groupsets, you can find the perfect components for mountain bikes and road bikes in different price ranges.

MTB groups, as well as in the road bike groups, the moniker AXS stands for wireless shifters. No cable clutter, smooth and precise shifting, and foolproof operation – the benefits of wireless shifting go much further than better durability and good efficiency. AXS (read "access") stands for the proprietary standard of data transmission developed by SRAM. It ensures that the components communicate smoothly with each other. You can customize AXS’ functions through an app.

eTap is the name for SRAM's shift logic, it’s responsible for the intuitive Handling of AXS wireless road bike groups. The right shift lever shifts into a larger gear, the left into a smaller one, both levers operated simultaneously control the chainring.

The disadvantage of electronic groupsets is, of course, their power requirements. To give you an idea of how long your batteries will run, here are a few numbers: the batteries in the grips last for about 70 000 gear changes, the front derailleur will make about 8 000 shifts and the rear derailleur can switch about 16 000 times before it must be charged (according to the manufacturer).

SRAM promises functional and elegant solutions, "elegant" is of course the perfect keyword to start with when it comes to road bike groups! The lightweight top group goes by the name of SRAM RED eTap AXS. It is considered one of the best wireless road bike groups that you can possibly buy. The shifting performance of the next in line SRAM Force eTap AXS still ranks almost at professional level. Here there are both 1x and 12-speed setups, whose gearing and precision will convince anyone who is looking for a lightweight, versatile road bike group. Force is also available in wireless eTap AXS versions. A jerk-free, quiet chain management makes it run quietly and smoothly. Rival and Apex are SRAM's cheaper road groupsets with different setups available, between 1x10 to 2x11 you have a lot of choices.

"Explorer" XPLR is SRAM's version of a gravel-specific groupset. There are different cassette options, which adapt the group to your bikepacking plans. 10-36T are for asphalt runners, 10-44T expand the spectrum to light terrain, 10-50T are absolutely off-road-worthy.

Time and again, SRAM comes up with interesting ideas. For example, with shifter components that are guaranteed to stay watertight to up to water depth of one meter. Just in case you should forget to park your bike before the swim at your next triathlon. For all groupsets there is now the option to mount hydraulic disc brakes.

With just one word, SRAM brings tears of joy to any mountain biker’s eyes. Ready? EAGLE. There are other shifters, but an Eagle is pretty much the s**t when it comes to getting an MTB into gear. The looks alone are exciting, you can mix and match your shift group from golden, black, rainbow or copper parts. You also have a huge choice of setups, a range of up to 500% is possible, the rear derailleur cage is made from super light carbon and the shift rollers have a robust ceramic bearing. The refined design of an Eagle chain runs nice and smooth, with considerably less noise.

There are different versions and setups that offer a wide range of uses and prices: you can buy cheap MTB groups or ultra-light, luxurious high-end groups. Of course, there are also wireless AXS shift groups for MTBs. As always, the quality and durability increases with the price, while the weight of the components decreases.

You will find of course the appropriate group for every MTB style, Enduro groups, downhill groups, parts for trail bikes and cross country groups. EX1 is a MTB group-bike built specifically for E-MTBs.

SRAM likes to make a point of catering to the needs of female cyclists with many of its shift groups and other bike parts. Shorter crank arms, for example, or shifters on which the grip lengths (the distance to the handlebars) can be adjusted for smaller hands, make a bike easier to use, more comfortable and safer for its female rider. SRAM is always happy to support female bike pros.

Your online shop for SRAM bike parts and spare parts

You can buy the different components of the various bike parts right here, such as rear derailleurs and front derailleurs. Among the shifters you will find the descendants of the first GripShift shifters, by the way. There are also cassettes, bottom brackets, cranks and chainrings, and of course, we're happy to supply you with all the important odds and ends, spare parts, chain locks or brake pads. But of course there is not only SRAM itself... we also carry the bike components of SRAM’s offshoots Truvativ, Avid or RockShox offer in other brand stores.