Don’t  Americans know how to build good bicycles? Don't worry, we didn't come up with this admittedly provocative question. Trek’s founder Dick Burke was wondering about this - fortunately he did so already back in 1976! Since then, enough time has passed and it has been used to prove the opposite! Today, Trek's MTBs compete for top positions all around the world, Trek’s road bikes define standards, leisure bikes and Trek’s e-bikes make everyday cyclists happy all over the world. But it all started with a bike ride and a provocative question. 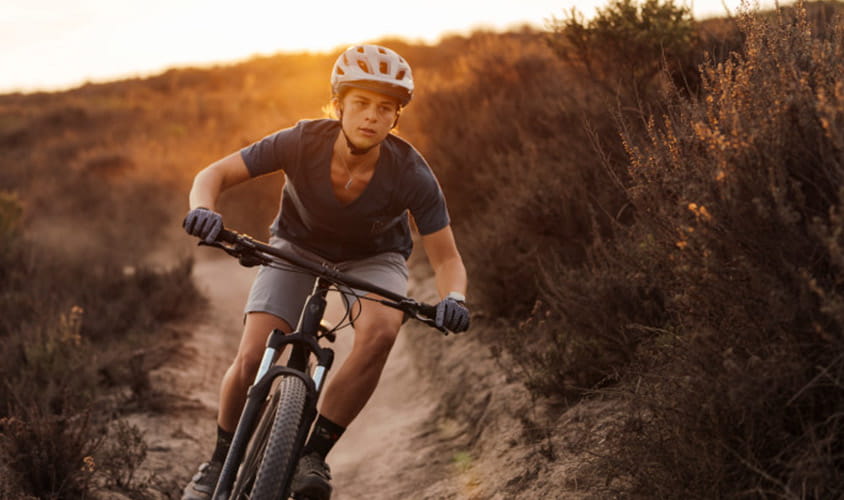 Things to know about Trek

According to legend, Burke first came into contact with bicycles when he spontaneously wanted to take a bicycle tour through Wisconsin with his son. The two rookies found a couple of good bicycles, but on that occasion they found that they could not find any good American-made bicycles. There simply weren't any. Burke tried to make a career as a bicycle dealer, but with little success. After all his bike stores had to be sold, he and his business partner Bevil Hogg began building bicycles – under the name Trek Bikes, this time with huge success.They began selling handmade frames from a barn in their hometown. Since then Trek has become a full-range supplier that proves on a daily basis that Americans know how to build decent bicycles after all.

Today, Trek is one of the first-rate bicycle manufacturers, not only in terms of quantity and range, but also when it comes to titles in international racing and the bikes that have what it takes to become real classics. To this day, Trek's headquarters are in Waterloo, Wisconsin, USA. They are located next to the old, red barn, where the first bikes were welded together in the 70s. Masses of bikes roll off the assembly line every day, always true to the company motto

Trek's legendary racing bikes are the machines that win the big races. The top favorite is always Madone. Aerodynamic Kammtail Virtual Foil tube profiles made of OCLV carbon, an electronic SRAM eTap shifting system complete with RED AXS power meter and, of course, IsoSpeed – the package is undeniably neat. The 2022 Madone stands on Bontrager Aeolus RSL 51 tubeless-ready carbon wheels. For this road bike there is no other choice. It will win.

The ultralight Trek Émonda also just experienced a re-release. Less than 700g of frame weight, aerodynamic tube profiles and a wireless SRAM groupset promise excellent speed and a nice uphill climbing focus. On flat territory, test rides revealed an increase of 60 seconds per hour. On ascents, it's still 18 seconds faster per hour. For all the aesthetics freaks out there, Trek has a special edition in store with metallic finish or even – hold on to your socks! – glitter particles! Émonda is available in a huge range regarding equipment and prices. From high-end road bikes with a five-digit price tags to entry-level bikes for a handful of dollars, there’s a lot of choice. For those who like to get their hands greasy there are  Émonda framesets so you can build your own legend.

There’s also that endurance bike on which the world's best riders journey, it’s called Trek Domane. SRAM 2x12 wireless, OCLV carbon, Bontrager carbon tires, IsoSpeed - the equipment of the top model is similar to its lightning-fast teammates. Here, however, the uncompromising urge to go forward gives way to a wider scale of possibilities and terrains, Domane is considered one of the best drop bar all-rounders on the market. Domane is also the name of Trek's Gravel bikes. The Domane is also available in a Domane+ version, an e-bike featuring the super light Fazua drive unit.

> Discover the Trek road bikes here in the online shop

No bike portfolio is complete without a nice selection of MTBs. Trek delivers fully suspended MTBs and hardtail shredders that promise a brilliant time after the paved roads end.

You have a choice here between potent trail bikes like the 2022 Fuel EX with a smooth 130mm suspension from Fox and a Fox Factory with 150mm travel, and those even more potent trail bikes like Remedy with 150mm/160mm of travel and a SRAM 1x12 GX Eagle drivetrain. Of course you also get dropper posts, carbon handlebars and hoops, 4-piston disc brakes and so on. The OCLV carbon frames sport a storage compartment for all those bits and pieces you need out there. Perfect material for unforgettable adventures in technical terrain.

The enduro bike Slash collects top marks in the test rides of the major bike magazines. Of course it does! After all, the current top model 9.9XX1 is equipped with everything you need when the going gets tough! There’s a wireless SRAM 1x12 groupset (with 10-52 cassette), RockShox suspension and more. The best part: you can treat yourself to a noble carbon ride. But you can also hit the trail on an affordable aluminum bike! Trek certainly has the bike that fits your budget.

On Trek's XC-Fully Supercaliber you can feel like a champion, it being the working material of many professional athletes. Light and superfast, the ultimate racing machine keeps the balance between speed and comfort  thanks to its 60mm/100mm travel. You get a 1x12 SRAM XX1 Eagle AXS groupset, carbon wheels and all the other gear that makes a bike a true winner.

Treks hardtails are significantly cheaper, but no less fun. Farley or Roscoe are lightweight, stiff performance rides that are capable of almost anything. Local racing, trail riding or XC-touring, a hardtail’s limitless versatility can’t be beaten. Speaking of touring, the 2022 1120 is a fully equipped adventure-ready touring bike, making it pretty unique in the bike market.

> Check out our Trek MTBs, hardtails and full-suspension bikes!

Trek bikes are for champions and every cyclist

Trek supports numerous professional athletes with road bikes and mountain bikes, even their own racing teams are out there collecting trophies. Trek's top bikes are always represented amongst the top spots of major competitions around the globe. Of course, there are ulterior motives behind all the sponsoring - the insights of the pros play a big role in developing new bike technologies.

But even if you're looking for a "stinkin' normal" everyday bike, a commuter that loves to hurry to the office, a comfy leisure bike or a fancy e-bike, you should stop by the “Treks” here in the BMO bike store! As we said before, Trek is a full-range bike shop. From trekking bikes to kids’ bikes, you’ll find them all right here in our Trek brand store!

Technology that turns the bike world upside down

Every manufacturer has their little secrets when it comes to making their bikes the best, fastest, safest, most comfortable or most durable. Of course, Trek's developers don't want to just stand by and watch, over and over again they surprise the bike world with their own creations, most notably their own carbon blend and a proprietary aluminum alloy.

Aluminum continues to be a popular material for bicycle frames. It is cheap, lightweight and durable. Carbon is nevertheless considered the better material, reason enough to let the aluminum castings gather dust? But not everyone can afford an exclusive carbon bike, fortunately, this is common knowledge in Trek’s think tank. Instead of devoting all their attention to high-class carbon bikes, the engineers put a lot of thought and effort into improving the aluminum frames. A modern hydroforming process allows for particularly slim tube diameters and a lightweight but strong frame construction with perfect aerodynamics and no visible welds.  As a result, even the more affordable aluminum bikes can boast a distinctive look while offering improved driving abilities.

Trek got an early start making carbon bike frames, with their labs experimenting with the lightweight and highly flexible fibers since 1991. A carefully engineered carbon frame is not only ultralight, it combines extreme strength with plenty of freedom design-wise. Trek uses OCLV (Optimum Compaction Low Void), the combination of a special carbon fiber blend and an innovative manufacturing process. In a top-secret processing step, these fibers are laminated without voids. The result closes the gap between bikes and the stars: Bike frames whose material meets aerospace engineering standards.

Carbon has many advantages, but also this one huge disadvantage - it does not tolerate punctual impact, flexing and bending let carbon dreams come to an end quickly. Trek’s mountain bikes get some extra-support called Carbon Armor, that protects your pricey carbon frame.

When buying a bike, you always have to choose between efficiency and comfort. An efficient bike tends to be uncomfortable, a comfortable bike tends to be slow, or so the sad truth goes. Until Trek IsoSpeed came along. A decoupler in the headset and another one around the seatpost don't compromise the stiffness and efficiency of a fast bike, but help the saddle and handlebars dampen the vibrations caused by the surface you’re riding on. IsoSpeed makes Trek bikes so much more comfortable and faster! Ingeniously simple and simply brilliant! IsoSpeed rides along on all the bikes that compete for the world’s top positions!

With this in mind ... ride bikes. Have fun. Feel good.